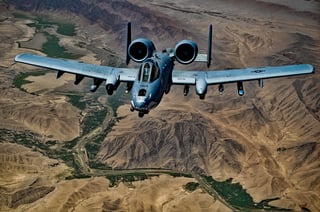 Military-grade laser-guided munitions are a key part of the directed energy and laser market, according to Sinha G. Gaurav, a researcher at BCC Research. A large number of new military contracts now include laser guided munitions systems.

Also in October, the U.S. Navy announced that it is closer to certifying the carrier-launched F-35C for combat readiness. The jet, which has flown from several aircraft carriers in test mission recently, will be able to launch munitions that use laser guidance technology. Missile maker Raytheon just announced that is it boosting production, with sales growth driven largely by the Paveway laser guided bomb, and the Air Force is testing its Block 5 MQ-9 Reaper drone, which also holds the Paveway II laser guided bomb.

Although the technology is chiefly American, laser guided munitions technology is showing up in a number of nations. For instance, Deutsche Welle reports that about 90 nations have drones in their military arsenals, although so far only 11 of those have armed drones.

This fall, Saudi Arabia has been flying a Scorpion light attack jet. The jet’s relatively large and reconfigurable mission bay can carry cameras, laser imaging equipment and electronic warfare jammers, one industry site noted. The plane’s maker, Textron, has flown a number of aircraft with laser guided bomb technology. In the case of Saudi Arabia, the new jet will likely be useful in that country’s campaign in neighboring Yemen.

Through 2022, the report states, growth in the laser weapon technology market will be led by Asia, where average annual expansion will be 14.2% through 2022. Europe will see expansion of 12.8% annually through 2022, while growth in North America will average just 6.9%.

For more information and forecasts on the global market of directed-energy and military lasers, download the free report overview.