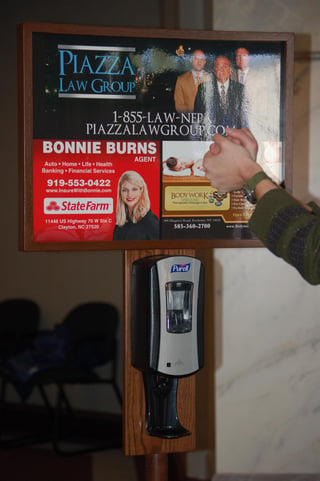 With hygiene at home, in hospitals or at the workplace seen as increasingly important for health and a disease-free environment, the global market for antiseptics and disinfectants are expected to grow at a compound annual growth rate (CAGR) of 5.2% through 2022, when the global market value could be worth $9.1 billion, according to an updated report from BCC Research.

That growth is not across the board, however, the report notes. In particular, the use of silver compounds is expected to lead the market in growth, with a CAGR through 2022 or 12.2 percent. Meanwhile, the use of phenols and derivatives—many of which are being banned in nations worldwide—is expected to grow at just 1.5% CAGR. Breaking that growth rate down by region shows some nuance, the report adds. The market is expected to shrink by 1.4% in North America through 2022, although it is anticipated to grow by 2.1% through the period in Europe and 4.2% in emerging markets through the period.

In September 2016, the U.S. Food and Drug Administration (FDA) banned the use of phenol in over the consumer products, including liquid, foam, bar and gel soaps. Phenols had the advantage of being inexpensive, effective in hard water, and easy to rinse off. They were, however, toxic to the skin, eyes and respiratory tract, and they are not affective against non-enveloped viruses and bacterial spores. The market responded to the ban by restricting the decline to some degree, particularly by focusing on non-banned phenol compounds such as chloroxylenol, parachloro-metaxylenol and others.

At the same time, the FDA banned the use of triclosan and 18 other compounds in over the counter consumer antiseptic washes. Some studies raised the concern that triclosan contributes to antimicrobial resistance and are toxic to naturally-occurring aquatic bacteria.

Companies reacted to the bans by finding suitable replacements. Consumer antiseptic wash manufacturers like Henkel and Procter & Gamble switched to quat compounds to replace the banned ingredients—a move which fueled the quat market. Further, implementation of the Food Safety Modernization Act drove the market forward by compelling food and beverage manufacturers to incorporate strict sanitation programs into their processes.

The rise of silver compounds, meanwhile, comes as silver-based antimicrobial technology is put into products ranging from healthcare and personal care to home care and health care. For example, in 2015, Dow Microbial Control, a part of Dow Chemical, along with Strategic Partners, collaborated to develop the next generation of medical scrubs and lab coats. The silver-based antimicrobial products reduce and actually inhibit the buildup of bacteria on apparel. In 2016, U.S. restaurant chain Chipotle Mexican Grill, adopted PURE Bioscience’s silver-containing antimicrobial products to combat food-borne illness outbreaks in all of its 2,100 stores.

Dow has lead the industry in other ways. In 2015, the company gained U.S. Environmental Protection Agency approval for its Kathon 7 TL antimicrobial tablets, which work in water-cooling systems to fight biofilms, bacteria, fungi and algae.

Another continued market leader is The Clorox Co., whose products can be found in many if not most American homes. The company is a leader in germicidal wipes using sodium hypochlorite, which is an effective product which can also cause irritation among users. The company, along with the Alliance for the Prudent Use of Antibiotics, has been a leader in the effort to increase awareness of the growing worldwide resistance to antibiotics. That effort leads back to the expanding use of silver compounds, which have a lesser susceptibility to developing resistant microorganisms.

Established in 1913, The Clorox Co. produces a long line of product, including kitchen cleaners, germicidal bleach, disinfecting wipes, daily sanitizing sprays, and wipes with embedded micro-scrubbers. In 2016 and 2017 the company was noted by the EPA for its efforts to promote the use of safer chemistry and products.

The Market for Antiseptics and Disinfectants

Increasing awareness about the importance of hygiene and sanitation in preventing and controlling microbial infections, particularly in developing parts of the world, and increasing demand in the healthcare and food sectors are driving modest growth in the antiseptics and disinfectants industry. Download a free overview of the report Antiseptics and Disinfectants: Global Markets to 2022 for more information on this global market and trends by segment and region.