Technological advances are yielding different types of polymerase chain reaction (PCR) techniques. BCC Research reveals in a new analysis that the use of PCR technology continues to expand into nonconventional applications, producing solid growth in the global market. PCR allows DNA sequencing, as well as the production of millions of copies of a specific DNA sequence, within minutes. As a result, PCR technology has helped make molecular diagnosis easier and faster. It is used frequently to diagnose disease, identify bacteria and viruses, and aid forensic investigations. And, so much more.

In July, researchers at Microsoft and the University of Washington (UW) announced they had broken a world record by storing 200 megabytes of data on synthetic DNA strands. "Think of the amount of data in a big data center compressed into a few sugar cubes. Or all the publicly accessible data on the Internet slipped into a shoebox. That is the promise of DNA storage—once scientists are able to scale the technology and overcome a series of technical hurdles," Microsoft stated in a blog.

DNA is needed as a storage medium because the world’s data is growing exponentially (see BCC Research’s earlier blog, “Genomical is the New Astronomical”), and molecular-level storage is vastly denser than hard drives, solid state drives, or technologies such as phase-change memory. "Those systems also degrade after a few years or decades, while DNA can reliably preserve information for centuries," the UW researchers stated in a news release.

The ongoing “Digital Universe” study projects that the amount of data will grow to over 16 zettabytes in 2017. The Internet of Things, in large part, will be responsible for doubling digital data every two years, resulting in 44 trillion gigabytes (44 zettabytes) by 2020. Tape technology is the densest form of storage available commercially today, at approximately 10 gigabytes per millimeter. Recent research reported feasibility of optical discs capable of storing 1 petabyte, yielding a density of roughly 100 gigabytes per millimeter. Still, storing zettabytes of data would take millions of units and use significant physical space. DNA, on the other hand, has a theoretical limit above one exabyte per millimeter, which is eight orders of magnitude denser than tape.

But here is where PCR comes in very handy. The UW and Microsoft researchers have also demonstrated the ability to perform random access of data from a pool of molecules. They developed an approach to convert the long strings of ones and zeroes in digital data into the letters denoting the four basic building blocks of DNA sequences. The digital data are broken down into pieces and stored by synthesis as a massive number of tiny DNA molecules. To access the stored data, the researchers encode the equivalent of zip codes and street addresses into the DNA sequences. PCR techniques are used to help them more easily identify the zip codes they are looking for. Using DNA sequencing techniques, the researchers can then read the data and convert it back to a video, image, or document file by using the street addresses to reorder the data.

Researchers have been experimenting with DNA as a data-storage medium for more than a dozen years, but it has progressed quickly. In 1999, DNA-based storage involved encoding and recovering just a 23-character message. According to Microsoft, researchers have increased the storage capability in synthetic DNA by a factor of 1,000 in the past year. They have also boosted decoding and encoding speeds by using computer science principles such as error correction.

PCR IS CHANGING THE FACE OF PERSONAL DNA TESTING

The Spartan Cube uses single use cartridges to run its tests (currently, three are commercially available, for detection of strep throat, genetic risk of developing Alzheimer’s disease, and presence of Legionella bacteria). For example, the strep throat cartridge uses cell scrapings (from the inside of the mouth) to test for the presence of infectious Streptococcus bacteria. The sample goes into the cartridge, the cartridge slots into the device, and processing begins. Thirty minutes later, a tablet that is wirelessly connected to the Spartan Cube gives the results.

In the future, cartridges will be available to diagnose chlamydia and other sexually transmitted diseases, test food and water for Escherichia coli, or determine an individual’s genetic response to drugs. Presently, the Cube’s medical tests are for research purposes only, intended for use at doctors’ offices, hospitals, and pharmacies. “I’m a medical doctor, so my Holy Grail is instant diagnosis and instant cure,” explained Lem to Motherboard.

BCC RESEARCH LOOKS AT THE FUTURE OF PCR

According to BCC Research’s estimates, the global PCR product market is expected to reach $9.8 billion by 2021, up from $7.9 billion in 2016, reflecting a five-year compound annual growth rate (CAGR) of 4.4%. The United States has dominated the global PCR product market, accounting for $3.2 billion in 2015, a figure that should increase to nearly $4.5 billion by 2021. Continuous innovations and research efforts are growth factors. The European market, the next-largest segment, should total $2.7 billion by 2021 on the strength of increased product sales. In the emerging markets segment, growth factors such as the rapid increase in new medical technologies, improved diagnosis of diseases, and expansion of healthcare should drive this market to exceed $2.6 billion in 2021.

GLOBAL MARKET FOR PCR PRODUCTS BY REGION, THROUGH 2021 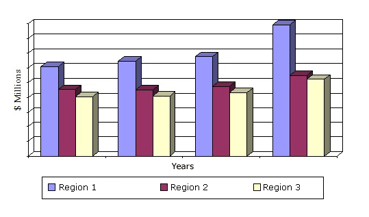 Reagents and consumables comprise the largest market segment in terms of revenues. The availability of ready-made mixes and reagents has spurred growth in the reagent market. The instruments segment, which includes real-time PCR instruments and thermal cycles, is another high-growth area. Real-time PCR technology has opened up the arena of PCR applications, ranging from diagnosis of infectious diseases to DNA fingerprinting in forensic science. The number of companies entering the PCR reagent business continues to rise, with most of these new entrants being small local companies. But to meet the market demands for new products and reagents, many of these companies must enter partnerships or collaborations with leading market players, especially for the product development and distribution phases.

“Drivers of the PCR market include those related to technology, such as advances in instrumentation, reagents, and PCR techniques, and increasing R&D,” says BCC Research analyst Shalini Dewan. “Other factors related to health and healthcare, such as increasingly sedentary lifestyles; the growing incidence of diseases such as diabetes, cancer, and cardiovascular; and the increasing percentage of baby boomers are driving growth as well.”