The market for laboratory-developed tests (LDTs) is evolving as the result of a mix of technological, financial, and regulatory factors. Broad technology platform shifts are underway. Serological and molecular diagnostic tests are becoming less popular as newer genomic and mass spectrophotometry (MS)–based tests are introduced. BCC Research has also observed that large national and regional reference laboratories are performing more LDTs, while smaller or academic laboratories reduce their testing volumes. High capital costs and low rates of reimbursement are hindering the efforts of smaller laboratories to keep pace with their larger counterparts.

LDTs are part of the realm of clinical diagnostics. The critical legal distinction is that an LDT is performed as a service. Unlike other clinical diagnostic tests, LDTs are not subject to standard regulation by the FDA in the United States. Rather, LDTs are regulated under the Clinical Laboratory Improvement Act of 1988 (CLIA) to ensure that such tests satisfy their stated claims. An LDT cannot be produced by any laboratory other than the one that is offering it. Although a given laboratory may receive reference samples from other laboratories and return LTD results as a service, it is not allowed to market the actual components of the test to the general public. 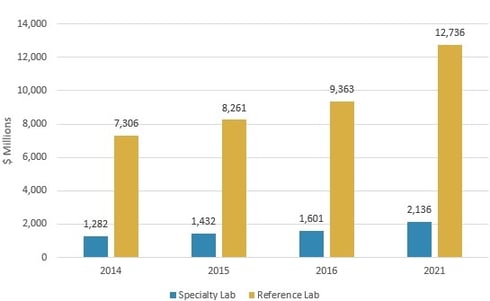 Other trends identified by BCC Research include:

In recent news, Bionano Genomics and Genoptix announced that they will codevelop diagnostic assays for some blood cancers using Bionano’s genome mapping technology. The companies seek to demonstrate that Bionano’s technology is “a more efficient, scalable, and powerful tool for looking at structural variants that are relevant for cancer in a diagnostic setting” than the fluorescent in situ hybridization (FISH) and karyotyping methods commonly used today, Bionano CEO Erik Holmlin says.

The companies plan to develop the diagnostics using Bionano’s genome mapping system, called Saphyr, which can be used to identify genomic structural variants. Details of how the tests will be commercialized are still being determined. However, Bionano will probably perform internal development of the reagents and bioinformatics. Genoptix would then purchase instruments and consumables from Bionano, do its own validation studies, and run the LDTs through its CLIA-certified laboratory.

The Saphyr system works as follows. Long DNA molecules are labeled at specific sequence motifs. Next, the DNA is loaded onto the Saphyr chip, where it is linearized in nanochannel arrays. The Saphyr instrument images the DNA molecules, which can be assembled into optical maps. The technology can be used to help with de novo assembly and to identify large structural variants.

Saphyr has a sensitivity of 98% for detecting translocations. Holmlin says Saphyr is a good fit for the diagnosis of hematological malignancies, because chromosomal translocations are a hallmark of many blood cancers. Currently, these diagnostic tests are typically based on karyotyping or FISH. Holmlin says the Saphyr genome mapping platform could offer a number of advantages over these technologies. Both karyotyping and FISH-based assays rely on cell culture, which can be “cumbersome and failure-prone,” he says. In addition, unlike FISH, which looks for specific variants, Saphyr can analyze structural variants genome-wide. (GenomeWeb, 7/7/17)