Advanced drug delivery technologies have become the Holy Grail in the treatment of several diseases and in unlocking the value of the pharma industry’s existing compounds, as well as in exploring the potential of several new compounds.

Many key players in advanced drug delivery are focusing on emerging markets in which to launch new products and increase their penetration. BCC Research reveals in a new study that over the next several years, the Asia-Pacific market should record the highest growth rate among major regions, with a five-year compound annual growth rate (CAGR) of 6.4%. 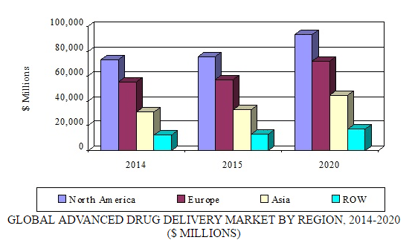 As seen in the graph above, the market is growing at a moderately healthy rate that should continue for the next five years. The market is not expected to become saturated any time soon. In fact, patent expiries, targeted drug delivery systems, gene therapy, nanotechnology, and biologics, which are expected to create new opportunities, should bolster growth of the global advanced drug delivery market.

As mentioned above, the Asia-Pacific area should see the highest growth rate over the next five years due to the strategic expansion of market players in this region, market diversification, and the growing multidimensional healthcare/pharmaceutical market in the region.

“Asia is considered a new frontier for pharma sector growth,” says BCC Research analyst Himani S. Wadhwa. “This is supported by the shifting focus of the pharma sector toward emerging countries such as those in the Asia-Pacific region, which are expected to support sustainable growth and help companies balance the effects of increasing regulatory issues, patent expirations, and stagnation of mature markets. This region represents huge untapped potential.”

Targeted drug delivery is another promising area that holds immense untapped potential. One example is moving toward smart delivery systems that can bypass cellular defenses, transport drugs to specific and targeted intracellular sites, and then release the drugs in response to specific molecular signals. The targeted delivery of drugs to tumors, for example, represents a significant advancement in cancer diagnosis and treatment.

Now, for the first time, scientists have found a safe way to deliver medicine to the placenta to actively bolster its function. In turn, this could help prevent the need for risky premature births. Many complications that occur during pregnancy have been linked to a malfunctioning placenta. Currently, there are no medications available to treat a poorly functioning placenta, so if doctors detect that a baby is not growing properly, the only option is to induce delivery.

"Placentas behave like well-controlled tumors. They grow quickly, produce growth hormones, and evade the immune system," said lead researcher Lynda Harris from the University of Manchester in the United Kingdom. "A lot of cancer research focuses on finding ways of delivering drugs to kill the tumor without affecting the rest of the body. We had the idea that if we could selectively target the placenta in the same way, we could deliver other drugs to help improve placental function and therefore treat pregnancy complications."

Harris and her team decided to see how the placenta would respond to two tumor-targeting peptides called CGKRK and iRGD, which are chains of amino acids that can be fashioned into minuscule drug-carrying capsules. In experiments with pregnant mice, they found that just as these peptides are able to zero in on a tumor and deliver cancer-fighting drugs to the site, they were also able to target the placental tissue and deliver a growth hormone that improved the organ’s function. Although the growth hormone did not appear to have an effect on normal-sized mouse fetuses, those which were abnormally small due to malfunctioning placentas were shown to grow in response to the hormone.

When the peptides were tested on human placental tissue, they were shown to bind to the cells and penetrate their membranes, suggesting that the preclinical results could be replicated in human trials. On May 6, the study was published in the journal Science Advances.

The new BCC Research study, Global Markets and Technologies for Advanced Drug Delivery Systems, examines the industry by technologies/systems, applications, routes of administration, and drug delivery vehicles. Analyses of global market drivers and trends, with projections of CAGRs through 2020, are provided.