BCC Research anticipates that increasing levels of research in the life sciences and new technological developments will boost the global bioseparation market by $5 billion from 2016 to 2021. At a projected five-year compound annual growth rate (CAGR) of 4.7%, the market should reach nearly $24 billion in 2021. In its study, Separation Systems for Commercial Biotechnology, BCC Research reports that a steady market has evolved as modern industries have begun to explore the advantages of bioseparation systems in their production processes. Spending on research and development, along with increasing competition and patent expirations, is giving new direction to the market.

Microfluidics and nanofluidics are driving growth of the lab-on-a-chip segment. Lab-on-a-chip enables sample analysis to be performed on the spot. It is in demand in part because of its usefulness in the oncology sector. A diagnostic lab-on-a-chip created by scientists at Stanford University costs less than a penny to make and can test cell samples for diseases such as tuberculosis, malaria, and cancer. The technology could help with early detection of diseases in the developing world, where lack of access to equipment can result in late diagnosis. “You can use it anywhere, as long as you have a printer,” says Rahim Esfandyarpour, who led the team that created the chip.

Each chip consists of a clear silicone chamber, which houses a sample of cells for testing and a reusable electronic strip. The electronic strip can be printed onto flexible sheets of polyester using a regular inkjet printer and conductive nanoparticle ink. Users can download different designs for the strip, letting it test for different things. The whole printing process takes 20 minutes. Applying an electric charge across the strip causes cells in the sample to separate according to their electrical properties, allowing scientists to isolate certain cell types. The chip could be used to separate out tumor cells circulating in the bloodstream, for example, to detect certain cancers at an early stage.

This type of kit could be used by any laboratory that has an inkjet printer and conductive ink, making it more accessible than other lab-on-a-chip designs over the past couple of decades. In particular, it can be difficult to get lab-on-a-chip technology to clinics and research laboratories in the developing world. New Scientist

Another lab-on-a-chip was designed to minimize preterm births. Worldwide, an estimated 15 million babies are born preterm. Complications associated with preterm birth are the leading cause of death for children under the age 5. Those who survive often suffer a range of health problems. In addition, the annual costs associated with preterm birth are close to $30 billion in the United States alone, according to some estimates. Using a palm-sized chip, Brigham Young University researchers hope to minimize the problem of premature deliveries. Their integrated microfluidic device is designed to predict, with up to 90% accuracy, a woman’s risk for a future preterm birth.

“It’s like we’re shrinking a whole laboratory and fitting it into one small microchip,” says Mukul Sonker, who led the study recently published in Electrophoresis. The goal for the device, which is cheap and fast, is to measure a panel of nine identified biomarkers of preterm birth in a finger-prick amount of blood. Currently, there are no biomarker-based diagnostics for preterm births. The scientists created a system for preconcentrating and separating biomarkers on their chip. That’s important, explains Sonker, because the relevant proteins and peptides are present in such a trace amount. Preconcentrating them on the chip allows enough of a signal for prediction. Brigham Young University

In the United States, the bioseparation market is expected to reach $9.3 billion by 2021. In Europe, it will increase to $6 billion at a five-year CAGR of 3.5%. BCC Research predicts that it will be worth $8.7 billion by the end of 2021 in emerging markets, which led the global market in 2016, followed by the United States. The growing populations in India and China are increasing healthcare spending and thereby driving growth of the bioseparation industry. In addition, some freedom from the stringent regulatory laws of the Japanese government is expected to have a positive impact on bioseparation in the emerging markets. 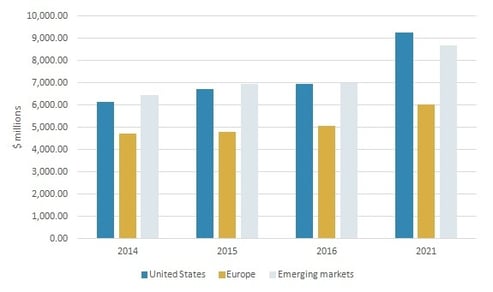 The bioseparation market has significant opportunities to expand due to the availability of new technologies, including continuous bioprocessing equipment and biomarkers. Traditional separation methods are constantly being modified to keep pace with the demands. The liquid chromatography segment is growing due to its increased use in research and clinical laboratories. The rising demand for biosimilars is expanding the market for chromatographic separations. The use of membrane filtration is in demand for the production of more efficient and optimized biological products. The biochip market is increasing due to the demand for genetic diagnostics.

“Single-use technologies and disposable techniques have improved over time, as has single-use continuous chromatography,” says Kevin Fitzgerald, BCC Research editorial director. “This development and improvement provide accurate data analysis, good functionality, reliability, and cost efficiency. BCC Research predicts that the demand will rise for bioseparation systems such as chromatography, flow cytometry, and membrane filtration. The demand for high-quality reagents is also expected to increase vis-à-vis the development of new drugs and different clinical tests. The market is moving, for sure.”