Is There a Silver Lining for the Medical Device Coatings Market?

Medical device coatings are essential to healthcare. Up to 80% of medical devices require at least one type of coating material or surface treatment. Coatings that enhance biocompatibility have improved the quality of implanted electronic devices and artificial joints. Catheters and examining room surfaces with antimicrobial coatings have become frontline defenses against antibiotic-resistant infections such as MRSA.

“In the process of improving health, the medical device coating and treatment business has matured into a sustainable enterprise. As such, it has also begun to experience the stabilization of growth that normally accompanies the industry-wide adoption of every new technology,” says Kevin Fitzgerald, BCC Research editorial director. “Simply put: Products that are likely to benefit from the use of coatings already use them.”

Between 2016 and 2021, BCC Research anticipates that growth rates of medical device coatings will be further reduced by factors both within and well beyond the healthcare industry. The following are some of those factors.

IS A MATURE INDUSTRY AT THE MERCY OF HEALTHCARE REGULATION?

As coated medical devices have become increasingly used for the treatment of diseases and injuries, the industry finds itself drawn further into the realm of healthcare regulation, which, like the device industry, has become a highly internationalized business.

“The dependency of coating suppliers upon the demand for medical devices means the industry will be whipsawed by economic shocks that strike the device business, such as the proposed end of the Affordable Care Act, which expanded the availability of joint replacements to countless thousands of people in the United States,” says Fitzgerald. “Should this provision of the law be repealed and not replaced, uninsured individuals who medically qualify for joint replacements could be forced to defer treatment until they become eligible for Medicare at age 65, further deterring market growth.”

BCC Research forecasts that the combined impacts of the maturation of coating technology and the factors described above will constrain the demand for medical device coatings and surface treatments. BCC Research’s study, Medical Device Coatings: Global Markets, forecasts that the global market for medical device coatings and surface treatments will register a 2.2% compound annual growth rate between 2016 and 2021, with global demand reaching $7.9 billion in 2021, up from $7.1 billion in 2016. 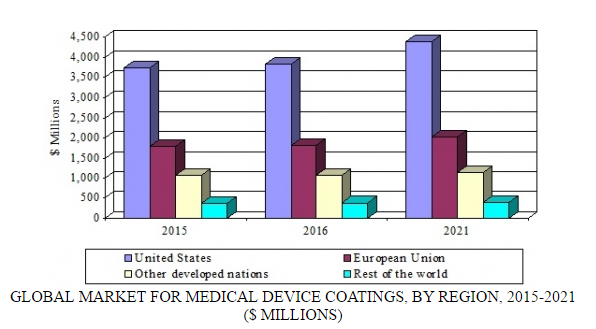 CAN A SILVER BULLET REINVIGORATE AN AILING MARKET?

Concentrations of silver that are far below levels harmful to humans can kill or limit growth of a broad range of bacteria, pathogens, fungi, and yeasts. The infection-fighting capability of silver has been known since antiquity. Early in the 20th century, compounds containing silver in an ionic state were commonly sold as antimicrobial agents. Silver-bearing compounds, chiefly silver oxide, remained popular until the commercialization of antibiotics midcentury.

Today, the antimicrobial action of silver ions is well understood and has found application in coatings that can prevent the spread of disease-causing bacteria in clinical environments. Coatings impregnated with silver and applied to catheters and other patient-contact surfaces have emerged as a useful tool in combating hospital-related bacterial infections, which, according to the Centers for Disease Control and Prevention, add $4.8 billion per year to US hospital costs alone.

There has been a resurgence of interest in the use of silver ion–releasing coatings as a frontline defense against hospital-acquired infections, an increasingly critical and expensive problem for hospitals as pathogens become more resistant to antibiotics.

The rise of methicillin-resistant Staphylococcus aureus (MRSA) infections is limiting treatment options for physicians and surgeons. An international team of researchers has used silver ion–coated scaffolds that kill or slow the spread of MRSA. These medical devices can help healthcare providers fight MRSA while growing lost bone tissue. “Osteomyelitis is a debilitating bone infection that can result when MRSA invades bone tissue, including bone marrow or surrounding soft tissues,” said lead researcher Elizabeth Loboa of the University of Missouri. “Increasingly, those in the healthcare profession are running out of choices when it comes to treating MRSA while regenerating tissue.”

Loboa and her colleagues set out to determine the efficacy of coating stem cell–seeded scaffolds with silver ions. The scaffolds were created from a polymer called polylactic acid, which is an FDA-approved material that eventually biodegrades in the body. Next, researchers applied a silver ion–releasing coating to the scaffolds and seeded them with fat-derived adult stem cells that could be triggered to create bone cells. They also seeded the scaffolds with MRSA so that they could observe whether the silver ions could fight the bacteria. The scientists found that the silver ion–releasing scaffolds not only inhibited MRSA, but also supported bone tissue formation.