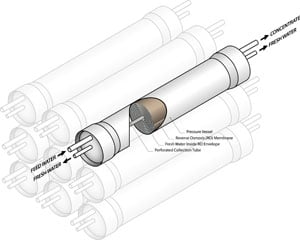 Graphene-oxide membranes have attracted considerable attention as promising candidates for new water treatment technologies. Graphene-oxide membranes have already demonstrated the potential of filtering out small nanoparticles, organic molecules, and even large salts. But, they couldn’t be used for sieving common salts used in desalination technologies, which require even smaller sieves.

Previous research found that if immersed in water, graphene-oxide membranes become slightly swollen and smaller salts flow through the membrane along with water, but larger ions or molecules are blocked.

Scientists at the University of Manchester in the United Kingdom have developed a graphene-oxide membrane that sieves salt out of seawater. The discovery demonstrates a potential for turning seawater into one of the most precious commodities on our planet: clean drinking water.

The next step, according to Rahul Nair, is to test this against existing desalination membranes.

"Realization of scalable membranes with uniform pore size down to atomic scale is a significant step forward and will open new possibilities for improving the efficiency of desalination technology," says Nair, who led the team to the discovery. "This is the first clear-cut experiment in this regime. We also demonstrate that there are realistic possibilities to scale up the described approach and mass produce graphene-based membranes with required sieve sizes."

When the common salts are dissolved in water, they form a “shell of water molecules around the salts molecules, which allows the tiny capillaries of the graphene-oxide membranes to block the salt from flowing along with the water. Water molecules are able to pass through the membrane barrier and flow easily, which is ideal for these types of desalination membranes.

"Water molecules can go through individually, but sodium chloride cannot. It always needs the help of the water molecules," Nair told Paul Rincon from the BBC. "The size of the shell of water around the salt is larger than the channel size, so it cannot go through."

Many desalination plants use polymer-based membranes to filter salt, but the process tends to be inefficient and expensive. Graphene oxide, which is easier and cheaper to make in the lab than single-layers of graphene, offers affordability and inexpensive reproducibility.

By 2025, the United Nations predicts 14% of the world's population will face water scarcity. The grapheme-based sieve offers the potential to meet this scarcity, especially in countries that are unable to afford large scale desalination plants.

Researcher Jijo Abraham, one of the study’s co-authors, says, "The developed membranes are not only useful for desalination, but the atomic scale tunability of the pore size also opens new opportunity to fabricate membranes with on-demand filtration capable of filtering out ions according to their sizes.”

The team hopes their discovery yields graphene-oxide membrane systems that can be built on smaller scales, thus making the technology accessible to countries without the financial infrastructure to fund large desalination plants.

The findings were published in the journal Nature Nanotechnology.

The rapid rise in the global population, especially in developing economies, should drive big growth in the global markets for reverse osmosis (RO) system components for water treatment from 2016-2021, according to BCC Research. In particular, the municipal application sector is expected to achieve a growth rate exceeding 11%, thanks to the increasing adoption of portable and residential RO systems, leading to a global market value of $11.0 billion by 2021.