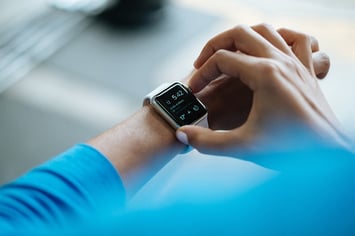 Wearable devices, which use biosensors to detect and monitor changes as well as capture physiological data, are primarily used in medical and fitness applications. The collection and analysis of data generated by wearables could also be applied to personalized medicine. Proponents believe that linking such sensors to smartphones will eventually be an integral part of achieving that goal. In addition, software platforms must be developed to integrate the output from sensors with genomic data and conventional medical information. Researchers hope that the merged data will result in signatures that can predict disease and help tailor treatments to each patient.

Designed as noninvasive devices that function autonomously, wearable medical devices are big business. A growing elderly population, the increasing incidence of chronic diseases, and technological innovations are all contributing to expansion of the global market for wearable medical devices. A study by BCC Research revealed that recent advances in materials science, electronics, photonics, and software are key growth factors, both for traditional nonconsumer markets and new consumer applications.

The United States dominates the global market for wearable medical devices, followed by Europe, Asia, and rest of the world (ROW). Greater accessibility to advanced technologies and a large presence of key players contribute to market dominance by the United States and Europe. Rising healthcare needs, escalated consumer healthcare spending, improvement of regional infrastructures, and growing investments by leading players and government agencies are spurring big growth in these regions.

However, the global market is not without constraints. “Although the market is yielding double-digit growth, the availability and affordability issues due to the higher cost of devices and the lack of feasible reimbursement schemes in most countries present major barriers,” says BCC Research analyst Rita Thakur Dangi. “Clinical medical devices must be highly accurate and reliable, with large data-storage capacity, to enable efficient diagnosis or monitoring. Battery life is another concern with most medical wearables, creating a need for long-lasting micro-batteries.”

Developed nations (such as the United States, Europe, and Asia) are undergoing a strategic change; the focus of the industry is moving from diagnosis to prevention of various chronic illnesses. This heightened focus on preventive care is driving investment in products and solutions for home care, remote monitoring, telehealth, and self-monitoring. Several large projects are exploring how to integrate data from smart devices with other health metrics.

Verily Life Sciences, a Google spin-off, is running a four-year 10,000-subject study to test whether smart watches and similar wearables can be integrated into medicine. Called Project Baseline, Verily’s project aims to investigate how readings from smart devices can be combined with genetic tests and other data to improve overall health and to predict when an individual may suffer a medical emergency (e.g., a stroke). Similar experiments are being conducted, including one led by the US National Institutes of Health (NIH), which will collect data from wearable devices on some of its one million participants. These studies are part of a broad effort by companies and researchers to take advantage of data generated by smart electronics.

Participants in Project Baseline will wear Verily’s proprietary Study Watch, which will transmit their heart rate, movements, and other information to a database. A sensor beneath their mattresses will monitor sleep patterns. Verily will also collect genomic data; information on participants’ feelings via self-reported surveys; health records; family histories; and the results of periodic urine, saliva, and blood tests. In-person clinical appointments will mainly occur at Duke University and Stanford University, which are collaborating on the project.

Jessica Mega, chief medical officer at Verily, says that a key goal is to help the company test and refine its platform for integrating multidimensional health data. “We are building infrastructure that others can use to test hypotheses, tools, and technologies,” she says. Verily will make its participants’ anonymized data available to researchers from universities and companies on a case-by-case basis. This may involve companies sponsoring studies that test new technology, says Mega.

The NIH study, called All of Us, received $230 million in the current fiscal year and is part of the agency’s Precision Medicine Initiative. Some research participants will have an option to submit their personal data collected via smart wristbands, sleep sensors, environmental monitors, genetic and microbiome sequencing, and other technologies. Stanford genomicist Mike Snyder is leading a smaller project called iPOP (integrated personal omics profiling). He has been collecting more than 250,000 daily measurements from roughly 100 people. Snyder published a paper reporting how his own wearable sensors detected abnormalities such as elevated skin temperature and decreased blood oxygen. He was subsequently diagnosed with Lyme disease.

Leroy Hood, cofounder of the Institute for Systems Biology, completed a study with 108 people. Lessons from the project were used to cofound the biotechnology company Arivale. For a fee, Arivale evaluates a person’s data over time, from sources including wearables, genome sequencing, and blood biomarkers. Some people who sign up for the program are at risk of diseases such as Parkinson’s and Alzheimer’s. Thus Hood says that pharmaceutical companies may be willing to pay for information on these individuals to learn how their chemistry changes if they start to become ill. “This information can indicate biomarkers,” he says, “and the idea is that you could then make drugs that would prevent the disease.” [Source: Nature, 7/6/17]

BCC Research’s study, Wearable Medical Devices: Technologies and Global Markets, analyzes how these devices monitor blood sugar and glucose; chronic illnesses such as cardiovascular disease and diabetes; and other parameters. The report also examines certain drawbacks faced by the market, such as high costs of devices, issues with reimbursement, and lack of awareness in developing countries. Global market drivers and trends, with projections of CAGRs through 2021, are provided.