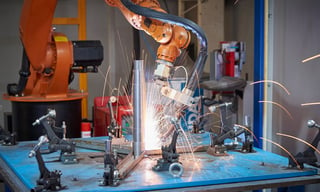 Global industrial companies are in the process of transforming themselves from reactive shop floors and supply chains based on islands of automation to lean connected networks of equipment and tools that streamline the manufacturing value chain.
This phenomenon, termed smart manufacturing, is featured in BCC Research’s recent report - Smart Manufacturing Technologies & Global Markets. The report documents the revolution in manufacturing and highlights the nearly $400 billion market it will provide by 2020.
In manufacturing, higher-value equipment has long been used in closed hardwired network environments. Until now, sensors, programmable logic control (PLC), and PC-based controllers have been largely disconnected from information technology (IT) and operational systems. IT and operational systems are traditionally organized in hierarchical fashion with data silos and are constrained by a huge installed base of legacy equipment.  By connecting machines, a manufacturer can now create intelligent networks along the entire value chain that communicate and control each other autonomously.
The term smart manufacturing is often used in combination with the terms Industrial Internet of Things (IIoT), smart factory, or Industry 4.0.  These terms underline the same goals: interconnectivity, interdependence, and integration of manufacturing processes that leverage data to deliver more information, leading to greater productivity and less waste.
The development of smart manufacturing has been primarily enabled by the recent growth of the Internet of Things (IoT) which represents a network of wireless sensor-enabled machines or devices that communicate without human interaction, connectivity or control. Smart manufacturing includes the machinery and sensors as well as all the embedded technology, the networks and software, applications and platforms involved in the implementation and utilization of those devices.
IIoT is an industrial adaptation of the Internet of Things and has many industry variations—from GE and its preferred use of the term “Industrial Internet” to Cisco with its use of the term “Internet of Everything”. Smart manufacturing includes all that the IIoT has to offer, including the human analysis of the data produced by the IIoT and the cloud. To be considered a smart factory, a facility needs to generate intelligence from its smart assets.
Recently, several countries like Germany and China have pushed for smart manufacturing.   Interestingly the term was also included in China’s 5 year plan in 2010.  China has proposed a “Made in China 2025 strategy” to promote domestic integration of digital technology and industrialization.  In the US, the Internet of Things has also attracted venture capital with investments estimated at $3 billion in 2016.  This effort is being implemented by industry participants including Siemens, which created an “industry of the future” fund.
Among industries, high tech and aerospace are forecast to see the strongest growth in smart manufacturing through 2020. Adoption levels will differ, but should be stronger overall in discrete manufacturing where smart manufacturing is expected to ultimately lead to production mass-customization—the process of delivering goods and services that are modified to satisfy a specific customer need.
The BCC Research study on smart manufacturing was conducted with a global perspective.  Market projections for investments in smart manufacturing were developed for the five major regions. The report provides an understanding of the way markets will be affected by smart manufacturing and insight into the new opportunities created by the innovation.
Report author Nathalie Granato has more than 15 years of experience in IT market research and competitive intelligence, including nearly 10 years at IBM.  As an industry analyst, she has often been involved in developing market strategies and projections and segmentation for emerging technology-driven market opportunities in manufacturing and other industries.
Written by Nathalie Granato on Dec 12, 2016 11:00:00 AM