From Baldness to Wound Care, Bioprinting Has Hair-Raising Potential

Bioprinting offers unique capabilities, including the ability to generate 3D constructs that contain both living cells and scaffolds in a precisely defined architecture. The result is an in vitro cell culture or tissue model that closely mimics living tissue. The pharmaceutical industry is avidly interested in bioprinted constructs for use in toxicity testing and disease modeling in drug discovery applications. Premier companies in the cosmetics industry have recently formed alliances with bioprinting companies or institutions, giving a clear indication that bioprinting may be disruptive in the industry.

Hair follicles created by bioprinting could one day be used as implants, according to L’Oréal. The cosmetics firm is partnering with Poietis, which has developed a form of laser printing for cell-based objects. Hair follicles have never been created this way, and the firms expect that it will take at least three years to adapt the process. L’Oréal already uses 3D-printed skin in its product research.

“If we manage to bioprint a hair follicle, we will enhance our knowledge of both hair biology and some of the mysteries of hair growth and loss,” Jose Cotovio, a director at L’Oréal’s Research and Innovation division, told the BBC. The follicles would initially be used to test new products, he added. The next step would be figuring out whether it would be possible to implant the follicles.

The technique will use a laser-assisted bioprinting process developed by Poietis over the past couple of years. It begins with the creation of a digital map that determines where living cells and other tissue components should be placed to create the desired biological structure. This takes into account how the cells are expected to grow over time.

The file is then turned into instructions for the printing equipment, so that it can lay down tiny droplets made out of the cell-based bioink, one layer at a time. The printing process involves bouncing a pulsing laser off a mirror and through a lens, so that when it hits a ribbon containing the bioink, a droplet of the matter falls into place. Approximately 10,000 of these microdroplets are created every second. The resulting organic tissue would then need time to mature before the hair follicles are ready to grow.

Poietis has already used the technique to create cartilage and other viable types of cell lines.

Bioprinting has origins in several technologies, including 3D printing, additive manufacturing, tissue engineering, and synthetic biology. Bioprinting is emerging as a key manufacturing tool for tissue engineering and regenerative medicine. The global market for bioprinting reached $263.8 million in 2015. BCC Research forecasts that it will attain $295 million in 2016 and $1.8 billion by 2021, at a five-year compound annual growth rate of 43.9%. It comprises two segments: research and applied (nonclinical) applications, and clinical applications. 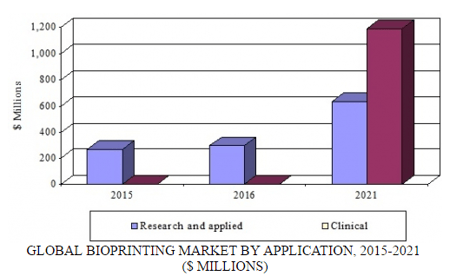 Advances in bioprint capabilities such as enhanced preservation of living cells during and after the printing process; the capability to simultaneously print multiple bioink types; innovations in bioink formulations; and improved printing speed and precision are key growth factors for instruments and reagents. The clinical market segment, forecast to reach $1.2 billion by 2021, will also drive growth during the next five years. Major applications include cardiovascular, orthopedics, wound care, and craniofacial repair. Bioprinted tissue constructs have significant clinical benefits, which will drive their adoption.

Considerable progress has already been made toward bioprinting tissue constructs for use in a range of medical applications, including for artificial skin. These applications represent the first steps toward the long-term goal of complete organ replacement. “The market for regenerative tissue products is large and growing rapidly,” says BCC Research analyst John Bergin. “A key market segment will be products that create new tissue using stem cells and other primitive material components. 3D-printed human tissues can be used for organ-on-chip as well as for regenerative medicine applications.”

Indeed, the ability to grow replacement organs is the Holy Grail of regenerative medicine. It would render waiting lists for organ transplants a thing of the past. According to the Organ Procurement and Transplantation Network, an average of 22 people die every day waiting for organs. And, the gap between supply and demand for organs continues to widen. Despite the technical hurdles to realizing the reality of bioprinted organs, there is reason for optimism. For one thing, the technology isn’t bleeding-edge—Wake Forest Institute successfully implanted engineered bladder tissue in humans a decade ago and is currently working on therapies for some 30 different parts of the human body.

HARVARD TEAM IS BIOPRINTING KIDNEY MODELS WITH IN VIVO POTENTIAL

Harvard researchers have advanced toward the ultimate goal of engineering human tissues and organs that can mimic native function for use in drug screening, disease modeling, and regenerative medicine. This new work builds upon their demonstrated ability to bioprint tissue constructs composed of multiple types of living cells patterned alongside a vascular network in an extracellular matrix. The team has also previously shown that these constructs could be scaled up to create thick, vascularized tissue. Now, they have constructed a functional 3D renal architecture containing living human epithelial cells. The study is published in the journal Scientific Reports.

The 3D renal architecture mimics a proximal tubule, which is an essential part of each nephron. Every human kidney has over one million nephrons, which perform the vital function of transferring components between blood and urine. Inside the convolutions of a nephron’s proximal tubules, 65%–80% of nutrients are reabsorbed and transported from the renal filtrate back into the bloodstream. As the bioprinted cells mature, the 3D renal architecture begins to perform the same important duties as a natural nephron’s proximal tubule.

The approach could eventually be scaled up and translated into an implant or organ-assistive device. In the near term, it may offer clinicians a patient-specific tool for assessing treatment options or diagnosing diseases. In addition, drugs or other factors can be pumped through the 3D renal architecture to investigate their nephrotoxicity and overall effects on the proximal tubule cells. The team plans to explore development of other types of complex functional human tissues and organs. “While thus far we have merely demonstrated a functioning subunit within the kidney, we are actively scaling up the method and its complexity to enable future in vivo applications,” said Dr. Jennifer A. Lewis, who led the team. Additional details are reported by ScienceDaily.

BCC Research’s new study, Bioprinting: Technologies and Global Markets, provides an in-depth analysis of the global bioprinting market. Bioprinting technologies, applications, patents, and key company activities are comprehensively discussed. Market dynamics, specifically growth drivers, opportunities, and restraints, are evaluated. Sales revenues are forecast for 2016–2021. Emphasis is placed on the main end-use applications for bioprinting, which include research, drug discovery and development, cosmetics, and clinical. The industry is analyzed by workflow, including bioprinting instruments, reagents, software, clinical procedures, and tissue formats such as organ/tissue-on-chip.