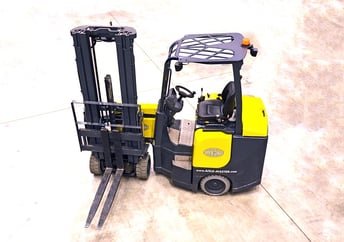 America’s commerce moves on forklift trucks. So it seems. Just about every product sold in this country is touched by a forklift at one time or another. From manufacturing and warehouse operations to shipping and receiving depots, lift trucks load and unload the goods and materials of our lives.

“Forklifts have been lifting America’s economy for over a century and we can now quantify our industry’s economic contributions to the overall U.S. economy,” says Brett Wood, ITA’s chairman and CEO of Toyota Material Handling North America.

Of the more than 200,000 units in the United States, more than 60% are electric, according to the study. The finding supports the finding in BCC Research’s Global Market for Forklift Trucks that use of electric-powered trucks is growing. This truck type is gaining traction due to the implementation of various advanced technologies and their growing application across various industries worldwide, that report notes. BCC Research estimates the global market for electric-powered forklift trucks to grow at a 6.5% CAGR, the highest rate among forklift truck types, from 2016 to 2021.

The ITA study also found that manufacturers of industrial trucks make a widespread contribution throughout the U.S. economy. Of the $25.7 billion total contribution to GDP, some $14.9 billion results from supply chain and consumer spending activities.

Overall, the sector benefits other parts of the national economy, including, for example, $3.5 billion in trade, transportation and utilities; $2.1 billion in professional and business services; and $1.1 billion in education and health services.

Industrial trucks are categorized into seven classes based on characteristics, such as engine type, design and size.

According to the Bureau of Labor Statistics, more than 540,000 forklift operators are employed across the country in all 50 states. “Workers in this sector are highly productive, and wages reflect this with above average annual income and placing them above the median income earners in most states,” says Hamilton Galloway, who head of consulting with Oxford Economics.