Three components must be present in order for a fire to occur: oxygen (or an oxidizing agent), heat and fuel. This is often represented by the "fire triangle" or "combustion triangle." The fire tetrahedron represents the addition of a component, the chemical chain reaction, to the three already present in the fire triangle. After the fire ignites, an exothermic chain reaction keeps the fire going until something is introduced into the fire that blocks it. Water is one of the most common choices of fire suppressants. But in some cases, water will not suppress the fire, and may even make it worse. Flame retardant chemicals were developed to block the other elements that were part of the "fire triangle." Flame retardant chemicals may block the oxygen (foams), hydrated flame retardant chemicals release water (aluminum trihydrate and magnesium hydroxide) and halogenated flame retardant chemicals (bromine and chlorine) remove free radicals and create a barrier of inert gas that suppresses the chemical reaction creating the fire.

Most items will release flammable gases when they burn, which are a catalyst for the fire. The fire is aided with the oxygen in the air. Some materials, like wood, do not produce gases when they burn. Instead, they produce a "char" as the result of smoldering, and often times can extinguish themselves. Natural charring has been adopted in some flame retardants, allowing them to create a char on the product that is burning. Much like the wood that stops burning from the char, these materials will self-extinguish when the char forms and smothers the fire.

Fuel is one of the basic requirements of the "fire triangle" described above. Some examples of fuel include a piece of furniture, a computer, a wood framed house or a Christmas tree. Fire retarding a fuel item will make it more resistant to fire. This is accomplished by either coating the item with a chemical that will reduce or prevent the effects of the fire or adding the fire retardant to the item, making it less prone to fire. The mechanisms of the process of burning will not be explained in detail in this report. However, they are available through internet searches and reports by the National Institute of Standards and Technology (NIST).

The following table lists the fire retarding characteristics of the chemicals that will be discussed in this report. In some cases, the flame retardant chemicals are used independently. In other applications, these chemicals must work together to produce their "synergistic" outcome. 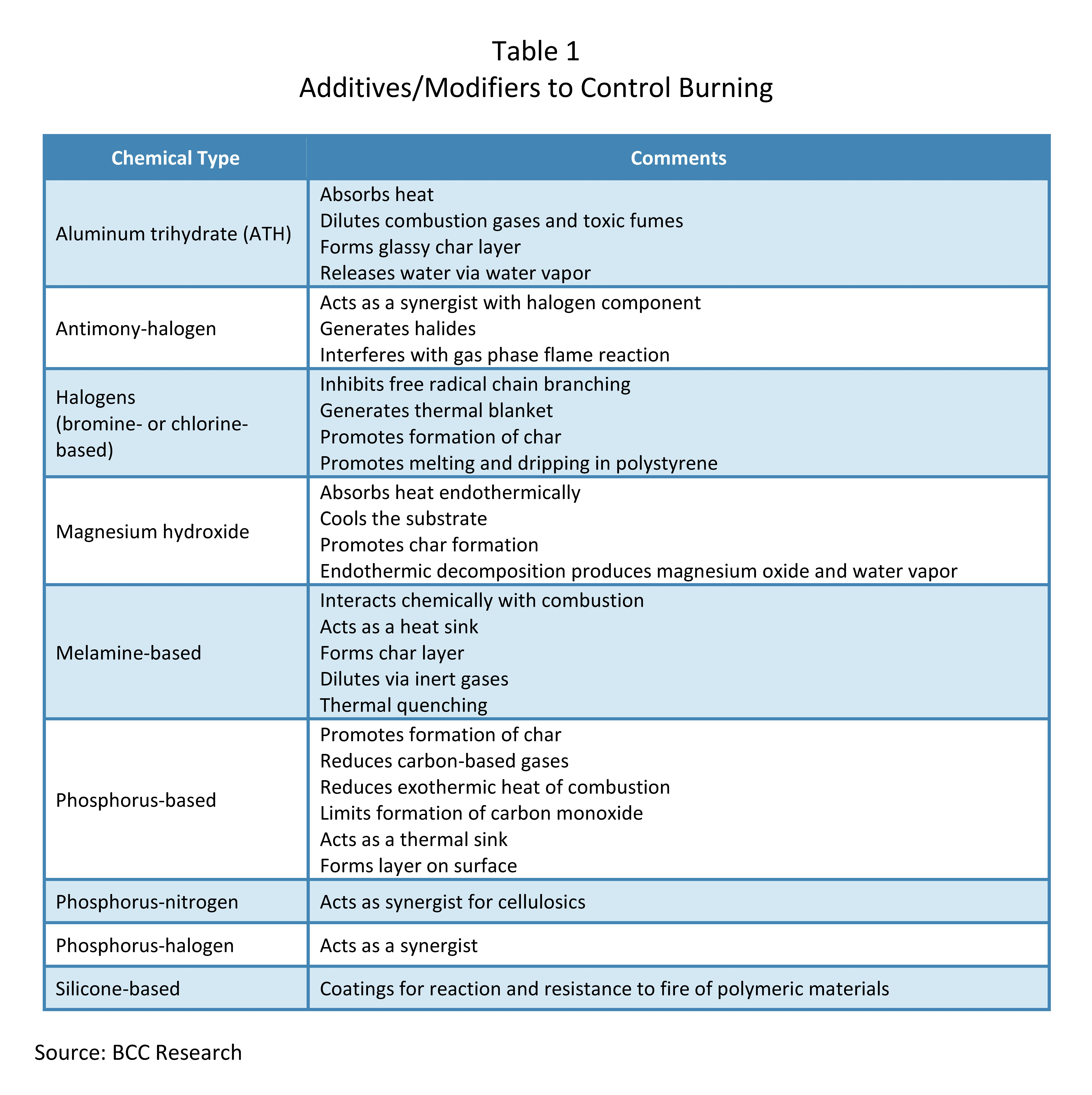 There have been some recent breakthroughs in coatings and other flame retardant chemicals. However, their application and success have yet to be measured.

The above is an excerpt from the report Flame Retardant Chemicals: Technologies and Global Markets. Looking for more information about flame retardants? Visit the FLAME 30 conference website.