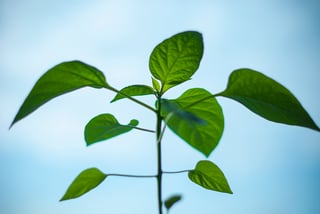 The interest in “green” or “sustainable” products like biodegradable polymers and other polymers continues to drive innovation in the food packaging industry. Researchers have developed an inexpensive biomaterial that can sustainably replace plastic barrier coatings in packaging and many other applications.  The compostable biomaterial offers the potential to greatly reduce pollution.
Developed by researchers at Penn State University, the material--a polysaccharide polyelectrolyte complex—is comprised of nearly equal parts of treated cellulose pulp from wood or cotton, and chitosan, which is derived from chitin, the primary ingredient in the exoskeletons of arthropods and crustaceans. The main source of chitin is the mountains of leftover shells from lobsters, crabs and shrimp consumed by humans.
The environmentally friendly barrier coatings have numerous applications ranging from water-resistant paper, to coatings for ceiling tiles and wallboard, to food coatings to seal in freshness, according to lead researcher Jeffrey Catchmark, professor of agricultural and biological engineering, College of Agricultural Sciences.
"The material's unexpected strong, insoluble adhesive properties are useful for packaging as well as other applications, such as better performing, fully natural wood-fiber composites for construction and even flooring," Catchmark said.
The biomaterial’s key property is the sturdy and durable bond between carboxymethyl cellulose and chitosan, Catchmark explained. The two polysaccharides, which are already used in the food industry, have different molecular charges and lock together in a complex that provides the foundation for impervious films, coatings, adhesives and more.
The polysaccharide polyelectrolyte complex coatings performed well in research, Catchmark said. Paperboard coated with the biomaterial, comprised of nanostructured fibrous particles of carboxymethyl cellulose and chitosan, exhibited strong oil and water barrier properties. The coating also resisted toluene, heptane and salt solutions and exhibited improved wet and dry mechanical and water vapor barrier properties.
The barrier coatings could replace millions of tons of petroleum-based plastic associated with food packaging used every year. Catchmark noted that the global production of plastic nears is approaching 300 million tons annually. In the United States, more than 29 million tons of plastic became municipal solid waste, nearly of it plastic packaging. According to Catchmark, 10 percent of all plastic produced globally will become ocean debris, representing a significant ecological and human health threat.
Catchmark began experimenting with biomaterials that might be used instead of plastics a decade or so ago out of concerns for sustainability. He became interested in cellulose, the main component in wood, because it is the largest volume sustainable, renewable material on earth.
"The challenge is, to do that you've got to be able to do it in a way that is manufacturable, and it has to be less expensive than plastic," Catchmark explained. "Because when you make a change to something that is greener or sustainable, you really have to pay for the switch. So it has to be less expensive in order for companies to actually gain something from it.”
Catchmark, who, along with Penn State, has applied for a patent on the coatings.
Study findings were published in Green Chemistry.
BCC Research, in its December 2017 report Plastics for Barrier Packaging, estimates the U.S. packaging barrier resin market should reach 9.4 billion pounds in 2017 and 10.6 billion pounds in 2022, with a compound annual growth rate (CAGR) of 2.5% through 2017-2022.
To learn more about this vibrant market, download the free report overview.