NRAM –  Riddle, Wrapped in a Mystery, Inside an Enigma Machine 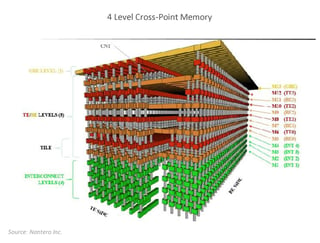 What amazed historians about the fall of the USSR, was that it had stayed together so long. The same can be said of Nantero.

Midpoint between the last Flash Summit and the next, it seems appropriate to examine the carbon nanotube enigma again. I was rewarded with good news—though I am confident half of the people reading this will remain unconvinced, while more than the remaining half will continue to be frustrated. Riddles, mysteries and enigmas have that effect on people.

Nantero’s CEO Greg Schmergel appears most excited about having completed a circuit design for an 8Gb NRAM product, with a 16Gb version imminent. He continued “A key part is that it is a cross point architecture which is selector-free.” In other words, it supports multiple layers within the die, and does not require a selector for every bit. Having only recently learned some of the nuances of traditional data storage and retrieval—the disk controller places data on the actual physical media after discussing this with the volume manager (which takes raw disk devices and puts them together to create virtual disk devices, which requires conversation with the file manager partitioner)—I needed an aspirin to dig a little deeper to understand why being selector-free might be an advantage.

It turns out multilayered memory systems—Like NRAM and Optane—fight a well-known sneak path problem in cross-point structures. Energy leaks arise because of how close all dense memory features have become. These false paths lead to misreading of memory states, and overall inefficiencies. To combat this problem, various selection elements such as threshold devices, and metal-insulator switching devices, are connected to the memory elements in series, which in turn creates more complex device structures and fabrication processes.

Greg Schmergel continued “The anticipated price per GB is about half that of DRAM today, which on top of the nonvolatility and higher density per die (16Gb vs 8Gb/die for mainstream DRAM) (which) provides a very compelling value proposition.” All this during a period of volatility during which Intel and Micron have dissolved their morganatic marriage.

NRAM is also being put into SSD Media by a mystery company partner. Nantero is not at liberty to disclose their name. SSD’s require extra power to cope with sudden power losses. This is one reason that limits their size. Energy required to flush a cache to NAND is high, since the DRAM, the controller and the Flash all need to be powered continuously until the flush is complete, to avert loss or corruption. In contrast, NRAM only needs to complete the data burst in process, then hibernate until power is restored. Along with being nonvolatile, this power-out savings decouples the cache size calculation from system design. Doubling, quadrupling, even growing the cache by 16X or 256X has no bearing on energy requirements for power fail cycles. Cache size increases can therefore directly improve overall system capabilities dramatically. For the moment Nantero is creating product at the lower cache size of the landscape.  But that defies logic. The riddle here is that for NRAM, even energy sensitive applications, like wearable electronics, present less of a challenge than for incumbent memory, if only because loss of power, or the threat of power loss, is much less of a threat OR a loss. Riddle me that.

This article is being in the middle of a minor surge in semiconductor equipment sales - $55.9 Billion Semiconductor Equipment Forecast - New Record with Korea at Top.

It seems a good time to point out that Nantero and NRAM will very likely be around longer still than most had thought probable, despite being an open riddle, mystery and enigma. I, for one, am glad. Changing the world of computer memory never has been a straight-line process.